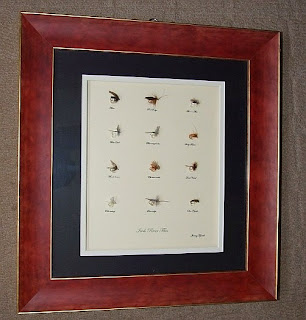 This is  a replica of a frame of flies that I was requested to do by the Irish department of foreign affairs ,
It was taken to the U K by The President of Ireland on his state visit earlier this year and was Presented to the Prince of Wales Prince Charles
Posted by Unknown at 13:43 No comments: 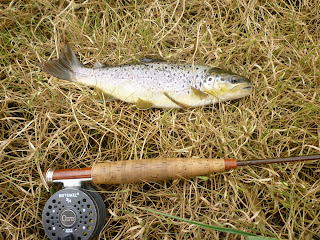 That was one of quite a few fish yesterday great start to the season hopefully he will be a bit bigger next year if the cormorants dont get him I came across two on my local river yesterday.  something should be done about them i think they are doing a lot of harm to our rivers and lakes ?

The Sooty Olive is a  very popular pattern and one that I always carry in the fly box it is one of the better-known traditional Irish patterns and more than likely one of the most favoured .
The name comes from the colour of the Seals fur body on the fly and this colour is used on a number of different styles from Bumbles to  dabblers etc .
It imitates a number of different species of Insects and is a very good fly to have up during a duck fly hatch .
it is a good all-round fly that can also be used for Sea trout in the summer months .
The original pattern has a wing of bronze mallard but this one has the blae wing , slips of teal wing feathers for the wing .
I don’t know where this pattern originated from it is just another one of the variants from the original pattern  but it has become very popular . 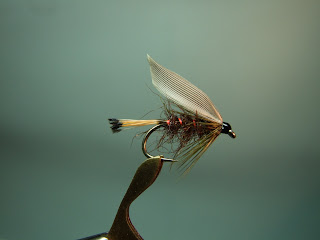 
There are so many pike fly patterns to choose from and they are not that difficult to tie once you have the right materials , of which there is an abundance of synthetic materials to be had in every colour that you can imagine .
If you use your imagination you can come up with some very nice patterns to imitate bait fish
If you can come up with something that resembles a fish that is dying or dead  and you put it in front of  a fish that  is in feeding mode it will definitely trigger a response .
This is just something that I came up with while trying out new materials it moves really nice in the water on the retrieve 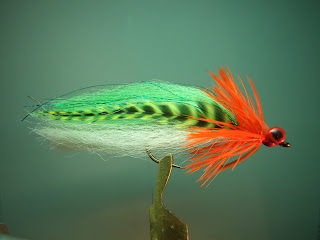 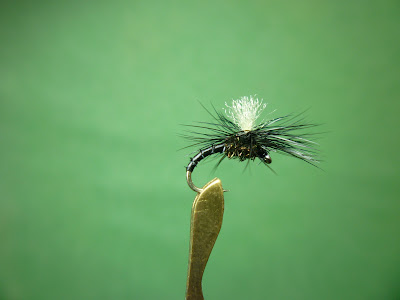 The black Gnat ,What can be said about this small insect.
It can be the dread of every fly fishermen and fly dresser , it can be a tricky fly to imitate  and get right  for use when trout are feeding on them on those warm summer days when this insect can be prolific in there numbers over Rivers and lakes.
I think the name black gnat can cover a list of different small black flies hence all the different patterns and sizes that are tied.
I like to fish dry flies that sit nicely in the surface film I think it makes them more realistic to the trout  I have come up with a  dry pattern that has given me some joy  on my local rivers  during the day  it needs to be fished   in water that is  not moving to slow casting the fly into the channels and the small pockets can sometimes produce a nice fish .